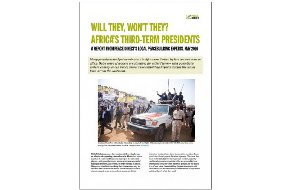 Today we launch a new series of reports from Peace Direct’s Local Peacebuilding Experts. Focusing on five different countries around Africa, the first edition discusses what happens when presidents and prime ministers outstay their welcome.

In DR Congo, Maguy Libebele says, Joseph Kabila is making people nervous. He needs to make a clear statement of intent on when the next elections will take place, and if he will stand. The same uncertainty is making for a lively debate in Sierra Leone, according to Abdul Brima, while in Burkina Faso, Boris Somé discusses the key role civil society organisations played in overseeing a transitional government – but the risk that they might overstep the mark. In Chad, Bouyo Séverin speaks to campaigners about how Idriss Déby has managed to stay in power for 25 years, while in Burundi, our anonymous Local Correspondent paints in vivid detail a picture of what can happen when things go wrong.

Click on the image above to download the report - and check back soon for the next edition.

Democratic Republic of the Congo Burundi

Latest from Democratic Republic of the Congo and Burundi →