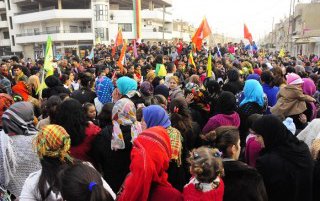 Amidst the Syrian conflict, an initiative is taking place to bring about democracy. Image credit: Yasin Dunam
The project calls on all parties in Syria to form an assembly engaging all communities
A new initiative was established in May 2015 in Cizîre Canton of Rojava (Western Kurdistan or Northern Syria) by 9 Kurdish parties. Their aim was to unite all the parties to work together to create a democratic solution to the Syrian crisis. Several meetings were held in Istanbul with parties, organizations and individual politicians within the Syrian opposition, in the hope of all members working in cooperation to bring an end to the conflict.

After 10 months of work, the initiative established a ‘Resolution Project for a Democratic Society’. The main principles of the project include a transformation from chauvinistic nationalism to a democratic society, the continuation of the fight against fundamentalist Salafist groups, the defense of Syria, and the respect of all people and communities living in the country.

In order to achieve these principles, the project calls on all parties in Syria to participate, negotiate and form an assembly engaging representatives of all communities, including women and youth organizations. The assembly is also expected ‘to undertake work towards a ceasefire, secure the release of all political prisoners, establish relations with all states involved and with the United Nations, set up an administration and organize an election in the country, and consist of two committees: a committee to draft a democratic constitution and a committee to prepare for a general election.’ The project also states that authority of assembly will end as soon as the Syrian crisis is settled and a new government is constituted.

There has been success in mobilising political parties and civil society organisations
The project has both short and long-term plans to be carried out by all parties in Syria. This shows that the initiative is aware of the fact that the crisis will not be solved alone by the regional and international powers. However it is also aware that parties within Syria will still need the help of international actors in negotiating a possible political non-armed solution.

Compared to the Syrian opposition, the de facto autonomous region of Rojava has been doing relatively well in maintaining unity of the armed forces and defending the region against Salafi groups. It has also achieved success in mobilizing political parties and civil society organizations towards the establishment of autonomy despite being denied and ignored by domestic, regional and international actors.

The initiative’s meeting with Syrian opposition in Istanbul marked a point of initial political and diplomatic contact between parties. Aldar Xelîl, one of the TEV-DEM (Democratic Society Movement) executives argues that ‘a federal system that will accommodate the identities of all peoples and religious groups is now inevitable’ in Syria. If Kurds gain support from opposition parties and actors who want to take part in a democratic resolution, it will be highly possible to establish several autonomous regions based on ethnic, religious and historical backgrounds.

The Alawite (west), Sunni (southwest to northeast) and Rojava (north) regions are three possible autonomies. The project will aim to de-centralize the state administration and empower local actors, organizations and populations for self-rule.  Fawaz Cemil Abdulqadir of Heyet al-Tansiq appreciates TEV-DEM’s project for democratizing Syria and notes that establishing democratic autonomous administrations in other parts of Syria is quite possible since it is a nationwide project and defends all religious, sectarian and ethnic diversity in the country.

The political rapprochement between Rojava autonomous administration and Syrian opposition has also become relatively effective in the military rapprochement of the mainly Kurdish People’s Defense Forces (YPG) and some groups within the Free Syrian Army. This has been observed especially in Kobanî where YPG and some groups in FSA are fighting together against ISIS. It is becoming more and more apparent that Rojava and Syrian opposition need stronger relations. Small steps may led to greater political and military cooperation between the two.

Some Syrian government officials have recently stated that the government may negotiate Kurdish autonomy in the northern part of the country. The Syrian Information Minister reportedly spoke on a state TV program: ‘Kurds are part of the Syrian nation. We are ready to negotiate with the Kurds as a part of the local administrative body inside Syria’s borders. Kurds are a major partner in the fight against ISIS, a threat we are facing together. We are ready to negotiate with Kurds under the Syrian national law and regulations.’ In some regions, Kurdish forces have been fighting alongside the Syrian army to combat the threat of ISIS. Image credit: free kurdistan

The parties and organizations in TEV-DEM and Kurdish initiative have always noted that they consider Rojava as part of the Syrian state and aim to achieve unity with democratic opposition parties who will recognize the status of this autonomy. Since both regional and international actors have a strong political, diplomatic and military impact on the Syrian opposition, it may not be that easy for the rest of the opposition to collaborate with autonomous administration in the north.

However, Rojava has been paid more attention after the attacks on Kobanî, especially when the US-led international coalition forces helped YPG and YPJ forces defeat ISIS bases and save the city. Now it is time for those who want to save other parts of Syria to support rapprochement of Syrian opposition and Rojava autonomy so that they achieve unity and create a democracy bloc to negotiate their demands with the Syrian government. That, as the initiative believes, must be under observation of regional and international actors who really want to politically and diplomatically empower parties, organizations and movements within and from Syria for a permanent peace.

Conflict settlement in Syria may have also positive impacts on the region especially in recovering diplomatic relations and reactivating trade with neighboring countries. Peace attempts need to be supported in all ways and the best peace agreement in Syria would be one that ensures peaceful co-existence, democratic foundation for political diversities, and internal self-determination.

Yasin Duman is studying for a PhD degree in Political Science at Sabanci University, and last year has completed a thesis examining Rojava Democratic Autonomy.
Read more from Yasin Duman

Syria
Disclaimer: The views expressed in this article are those of the author and do not represent the views or position of Peace Direct. 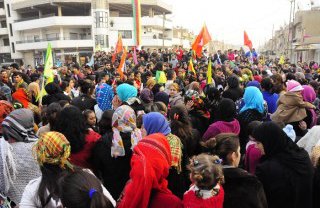