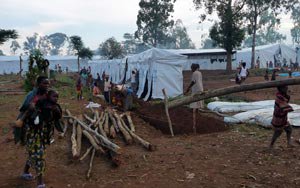 Burundian refugees in Rwanda. Image credit: EU/ECHO/Thomas Conan
Burundians have no alternative: they must continue seeking a consensual solution through dialogue and rejecting violence in all its forms.
Since late April, when Burundi's sitting President announced his bid for a third term, Burundi has lived with an atmosphere of violence, political tension and electoral crisis. This did not prevent the government going ahead with planned legislative and municipal elections on June 29.

Held in an agitated context and boycotted by the opposition, the poll had a varied turnout in the provinces. It was characterised by a series of irregularities ranging from delays in the opening of polling stations to disturbances related to insecurity, acts of intimidation and harassment of voters in certain areas. These factors are far from ideal for guaranteeing free, credible and transparent elections.

Beyond these disputed election,s which are not reassuring for national peace and regional stability, the organisation of the elections can be interpreted as an expression of government force that challenges and endangers the little democratic progress so far achieved since the end of the civil war. Ahead of the elections there were repeated calls from civil society, the opposition and the international community for a consensual electoral calendar.

The holding of communal and legislative polls - and if nothing changes the presidential ones on July 15 - in a context of fear, intimidation and repeated violations of human rights, and without the participation of the opposition, is likely to escalate the crisis in Burundi. More worryingly, the disarmament of armed youth groups linked to political parties has not yet taken place and the rumours of a rebellion in preparation continue to be spread in Bujumbura, Burundi's capital.

Nothing is certain at this stage but political actors - whether from the government or the opposition - who refuse dialogue and encourage the use of violence and unilateral paths will be held primarily responsible for the political and security deterioration. Burundians have no alternative: they must continue seeking a consensual solution through dialogue and rejecting violence in all its forms.