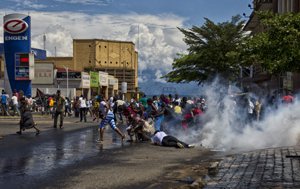 The Burundian capital Bujumbura has seen serious violence over the last year. Photo credit: thanks to Igor Rugwiza.
Faced with this terrifying situation, a quarter of a million people have fled
The situation in Burundi is a terrible example of what can happen when politics goes wrong.

A year-long crisis has seen violence and alarming human right violations across the country, which is much worse than most people realise. The total number of fatalities is often reported as being around 450, but detailed analysis indicates that at least 1,000 have been killed. More than 250,000 people have fled the country.

Why has this happened? The immediate trigger was the decision by President Pierre Nkurunziza, who had already served two terms in office, to stand for a third term in the July 2015 elections. He had previously spent 2005-2010 and then 2010-2015 as head of state. Nkurunziza argued that because he was nominated by Parliament the first time round, it did not count. Burundi’s constitutional court, allegedly under duress, agreed with him, but many others did not – and took to the streets to demonstrate.

A year of violence

The government clamped down hard on the protestors, and the situation deteriorated after a failed coup d’état in May 2015. Since then, Burundi has seen waves of violence targeting ordinary citizens and security forces across the country, not least in the capital, Bujumbura.

Residents in the so-called ‘dissenting districts’– where many of last year’s protestors live – have seen dozens of people disappear overnight. If they reappear at all, it is often as corpses in the streets. Many have clearly been tortured, and some have been executed. Across Burundi, hundreds are missing, and towns and villages are reeling from grenade attacks, kidnappings, and intimidation by armed groups.

Faced with this terrifying situation, and in the context of a country whose civil war ended only a decade ago, a quarter of a million people have fled to neighbouring countries, causing a refugee crisis for which the UN does not have enough money and is struggling to raise more. This is a huge number in a region which is still recovering from multiple armed conflicts.

Despite warnings, Burundians are refusing to turn on each other
In terms of civil society, it has been very difficult. Independent media were attacked in the wake of the coup attempt, with several independent radio stations burnt down. Journalists and civil society leaders have fled. Some civil society organisations working on human rights monitoring, governance and democracy have been suspended, and seen their bank accounts frozen.

Such organisations, as well as trades unions and other civil society groups that are still operating inside the country, do so at serious personal and professional risk. This virtual information blackout makes it hard for Burundians to hear about what is going on in their own country, which makes it easier for politicians and other elite members of society to try and manipulate factors such as ethnicity to support their cause.

Fortunately, despite many outside observers warning that the situation threatens to disintegrate into ethnic or other identity-based conflict, Burundians are persistently refusing to turn on each other. This includes, in particular, the Army, whose integration across ethnic lines was one of the undoubted success stories of the Arusha Accords, the peace deal which ended the civil war.

There is extremely worrying information that the Army’s unity is fracturing, with targeted attacks on – and desertion by – senior officers. But so far, the Army has held firm, and retained the trust of the Burundian people as a neutral force in politics. It is vital that this should continue.

However, the lack of information is a big problem. It is helping to polarise positions, with people either being “for” or against” Nkurunziza’s third term. And this in turn makes it very difficult to get anyone around a negotiating table, as the government has announced that it won’t engage in talks with the radical opposition part of the Conseil National pour le respect de l'Accord d'Arusha pour la Paix et la Réconciliation au Burundi et de l'Etat de Droit (CNARED). This is a group which aims to uphold the Arusha Accords, but which the government calls a ‘terrorist’ organisation. With almost no negotiating space even to talk about alternative political futures for Burundi, the status quo prevails. And while that happens, people continue to die.

But all is not lost. As mentioned, ordinary Burundians do not want this conflict – that is why so many have left. One day, they will return, and rebuild. For that to happen, someone, somehow, needs to get all parties to enter a dialogue, without preconditions or an agenda, beyond discussing all the issues linked to the crisis.

The momentum for such talks has swung back and forth but no one has yet managed to get senior representatives from the government, opposition political parties, civil society and all other relevant stakeholders to be in the same place at the same time, and to stay there.

Doing so would be a first step to restoring hope that Burundi can build on the progress made since the end of the war in 2005. And that’s where the regional facilitators are focusing efforts, hoping to get these talks resumed later this month.