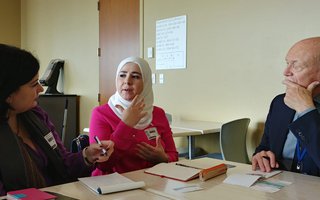 This article was originally written by Mary T. Yelenick and published on Pax Christi Peace Stories.

I first met Najlaa late last Fall, at a forum at the UN sponsored in part by Peace Direct, celebrating women from around the world who were making a difference in their communities. The following day, Najlaa joined our UN-NGO Syria Working Group for a discussion of her life and work.

Najlaa and her family once lived a comfortable life in cosmopolitan Damascus. With the breakout of war in Syria, that life ended. A brutal barrel-bomb attack killed members of her family and demolished parts of her neighborhood. In the aftermath, her younger son could not be found. Najlaa and others searched frantically through the rubble for him, eventually finding him – alive, but seriously injured. The only way for Najlaa and her family to secure the medical care her son needed was to flee to Turkey. Her son did survive. But Najlaa and her family remain refugees.

"Herself personally experiencing the deep loss and trauma of displacement, Najlaa recognized that the nightmarish existence confronting Syria refugee women could not be borne alone.”

Upon arrival in Turkey, Najlaa was haunted by the number of older Syrian women in the streets desperately begging for food for themselves and their families. She was also deeply saddened to learn that the only real way for young Syrian refugee women – many of whom had been raised in deeply conservative families – to survive was to join the local houses of prostitution.

Herself personally experiencing the deep loss and trauma of displacement, Najlaa recognized that the nightmarish existence now confronting Syrian refugee women could not be borne alone. So she approached and introduced herself to other women, inviting them to join with her, in her small rented home, to discuss what they could do collectively to adjust to their new realities.

These small gatherings gave birth, in 2013, to a new organization, Kareemat (meaning “women of dignity,” in Arabic). Over the years, Kareemat has functioned as a place of gathering and stability for Syrian women refugees and their families. Kareemat offers counseling and vocational training for women, teaching them sewing and other life skills. To Najlaa’s immense pride, young Syrian refugee women are no longer forced to work as prostitutes; instead, they have acquired , through Kareemat, work skills and community connections that enable them to live a less degrading and dangerous life. In addition to helping Syrian women lead better lives, these new avenues of employment for women afforded by Kareemat also help combat negative stereotypes of Syrian women in Turkey.

Kareemat also engages in a variety of peacebuilding activities: hosting workshops on the dangers of war; facilitating discussion groups regarding the impact of violence against women; and presenting film screenings to raise awareness of the important role of women leaders in effective conflict resolution.

Kareemat also engages in activities designed to dissuade young Syrian refugees, whose passions are sometimes stoked by their vengeful elders, from returning to Syria to pursue armed retaliation. When Najlaa’s own eldest son vowed repeatedly to return to Syria to seek vengeance, she responded that if he insisted on returning to Syria, she would also return, with him, to remain always by his side. Her threat of accompanying him – which her son recognized would place his mother in mortal danger – convinced him to relinquish his dream of retaliation and violence. Instead, both he and his brother have now renounced any plans of revenge, and are directing their energies instead to acquiring an education.

This accomplishment, Najlaa said – her turning her two sons away from perpetuating the cycle of violence – is her proudest personal achievement.

Najlaa’s vision, courage, and fortitude, alone, would have made her remarkable. But what will stay with me most is the message she had for those of us who might be inclined to simply romanticize her story, without connecting it to our ourselves.

"I felt the tyranny and imbalance of a world in which people given vast power over the lives of others – the global decision makers – do not speak even the same language as those who suffer the consequences of their decisions.”

Najlaa explained that she recognized that traveling to the United Nations was a once-in-a-lifetime gift and opportunity for her, and for the women of Kareemat. When she arrived in the United States, she realized that her first obstacle was the fact that few of the people she would meet spoke Arabic, and that she would thus not be able to convey, in her own tongue, the urgency, or nuances, of her personal story. Instead, she would have to rely on the sensitivity and goodwill of an interpreter. (Luckily, her interpreter, Lebanese journalist Sawssan Abou-Zahr, who had previously published an excellent article about Najlaa, https://www.peaceinsight.org/blog/2018/10/remarkable-story-kareemat-and-its-founder, was both an effective and empathetic translator.)

Thus, the first words spoken to us by Najlaa – this woman who has accomplished so much, in unfathomable circumstances – were an apology to us for not being able to speak English. At that moment, I felt the tyranny and imbalance of a world in which people given vast power over the lives of others – the global decision makers – do not speak even the same language as those who suffer the consequences of their decisions.

Najlaa’s story was both heart-wrenching and memorable. Yet I sensed her holding back.

Finally, after about an hour of questions-and-answers, there seemed to be a shift in our group dynamics. Najlaa sat back, paused, looked at us closely, and asked if she could be frank with us. She seemed finally to trust her audience – despite the imbalance of power and access – to hear what she was really trying to say. We (with some discomfort), urged her to speak honestly.

She then explained that, in preparation for this trip to the UN, she had made cards (no easy task, living as a refugee) to share with the people she met, listing the contact information for her and for Kareemat. Najlaa had made a significant effort the day before, she said, personally to hand a card to everyone in the room.

And yet at the end of the meeting, most of her cards remained on the table. People had accepted her card, but had not cared enough to take it with them.

Culture, media and advocacy Women, Peace and Security Children and youth Human rights Dialogue and mediation Preventing violent extremism
Disclaimer: The views expressed in this article are those of the author and do not represent the views or position of Peace Direct. 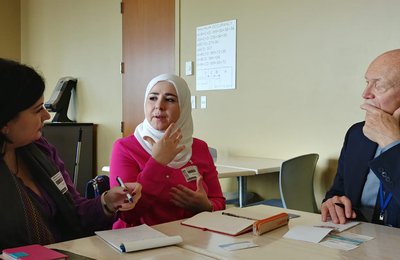