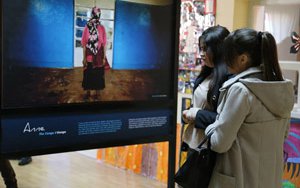 Young people in Brčko view an image by Pete Muller as part of PROOF and PCRC's exhibition "My Body: A War Zone". Image credit: Suad Barucija

The art of storytelling is a powerful tool of peacebuilding. It occupies a central position within processes of conflict transformation around the world and is regularly used within intractable and intergroup conflicts. Within such contexts, storytelling’s capacity to catalyse processes of healing both within and between communities can increase levels of understanding and empathy, reweaving the ‘shredded fabric’ of societies following protracted violent conflict (see Bush, Logue and Burns, 2011 for more information; reference and further reading at the end of this article).

In bringing about this transformation, storytelling can of course take many different guises – not only as stories told through oral or visual narratives, but through one of the many different forms encompassed by each of these overarching themes. Indeed, visual narratives can be further divided into film, television, art, and photography, the latter of which is increasingly used within peacebuilding initiatives.

At the Post-conflict Research Center (PCRC), photographic exhibitions are central to several of our main projects. Our photographic exhibition “The Rescuers”, produced in collaboration with PROOF Media for Social Justice (PROOF), focuses on rescuers from Bosnia-Herzegovina and around the world who risked their lives to transcend religious, ethnic, or other boundaries during times of conflict. The exhibition “My Body: A War Zone”, also a collaboration between PROOF and PCRC, similarly features the stories and portraits of survivors of sexual violence from Bosnia-Herzegovina and around the world. The question is, in addition to the main transformational processes of storytelling, what specific advantages do photographic exhibitions provide when seeking to transform relationships between divided communities and groups?

The Power of the Image

It’s often said that a picture paints a thousand words, but what does this mean within the context of a peacebuilding initiative, and why is it of importance? Firstly, the visual qualities of photographic images provide specific benefits. Images are highly accessible to storylisteners: they span generations, languages and cultural differences. Diverse audiences can easily engage with the characters or situations presented to them, regardless of their background. Striking images are particularly effective at grabbing, maintaining, and retaining viewers’ attention, providing narratives that are both cognitively and emotionally compelling – a process that is essential to the very workings of storytelling as a peacebuilding mechanism. Secondly, photographic images have the capacity to bridge between the objective world and subjective truths – reality versus perception. This means that a single captured image can simultaneously entertain or even connect multiple perceptions or experiences, allowing viewers to simultaneously reflect on their own experiences whilst also seeing and dwelling inside the experience of ‘others’ from different backgrounds. For example, an image of a broken toy can appeal to multiple people’s experiences of conflict, drawing threads between seemingly divergent perspectives by highlighting the existence of commonalities such as the loss of youth or innocence. These commonalities allow problems rooted in different contexts to become shared between conflicting parties, weakening notions of ‘difference’ and facilitating processes of rehumanisation.

Finally, the power of the photographic image also lies in the versatility of its construction, and thus its flexibility in its application. Depending on its contents and composition, a photographic image can either be used to negotiate issues of the past in creative ways, purposefully highlighting common experiences, emotions or themes amongst divided groups, or be used to foster alternative imaginations of the future that contradict accepted divisive narratives. In one of my colleague’s words, ‘through… multimedia approaches you can actually show that life is possible together’.

The very form of the photographic exhibition itself is also incredibly inclusive, promoting widespread participation within projects. Easily transportable, PCRC’s travelling exhibitions are displayed in urban centres and more rural communities across both entities in Bosnia-Herzegovina. In each location they are also displayed in prominent or free-to-access public spaces or squares, opening up processes of peacebuilding to all members of the local community.

Importantly, participation within these processes is solely within the control of the viewer. The static nature of the photographic exhibition allows individuals to engage as they wish. Viewers can confront, work through and revisit an image at their own pace – a characteristic not shared by the intensity of the oral medium or the linearity of the medium of film. Such a feature may seem trivial to some, but is significant when considered within the context of a post-war society that has undergone severe trauma. This freedom of participation is significant in mediating the emotional response of viewers and reducing the risk of retraumatisation.

A Moment in Time and Space

The physical characteristics of the exhibition itself are also of significance when considering their application within peacebuilding initiatives. It is widely accepted that the telling of stories within contexts of intergroup and intractable conflicts negates the dangers of a single story. The proliferation of alternative narratives within contexts typically defined by selective, entrenched narratives weakens established stereotypes, prejudices, and consequent intergroup divisions. However, photographic exhibitions go beyond merely propagating the existence of alternative perceptions. By occupying a tangible space they the allow narratives to – in a sense – literally cross and weaken divides, making a physical, if temporary, impression on a local community’s landscape of narratives. A young woman views an image by Pete Muller as part of PROOF and PCRC's exhibition "My Body: A War Zone". Image credit: Suad Barucija

Such an idea may seem a little abstract, but the creation of this ‘space’ has real implications on the ground. The construction of an exhibition fosters an environment within which personal responses to the photographs can be expressed, shared, and discussed at a communal level. The characteristics of the space – such as the absence of the storyteller – encourages a collective dialogue that can inspire a far broader form of critical reflection. As viewers project their own experiences onto the photographs, participants are able to consider their own perspectives and responses to those of others’ around them, moving the peacebuilding process beyond the boundaries of the original story.

Finally, particularly within communities defined by inter-group division, the display of the exhibition has the potential to act as a neutral point of focus around which local actors can coalesce: local government officials, education officials and groups, police, NGOs, and youth can all use it as a point of cooperation, improving relations between different groups within the community.

Luwisch, F.E. (2001). ‘Understanding what goes on in the heart and the mind: learning about diversity and co-existence through storytelling’. Teaching and Teacher Education 17, 2, pp. 133–146.

Bar-On, D. and Kassem, F. (2004). ‘Storytelling as a way to work through intractable conflicts: the German‐Jewish experience and its relevance to the Palestinian‐Israeli context’. Journal of Social Issues 60, 2, pp. 289-306.