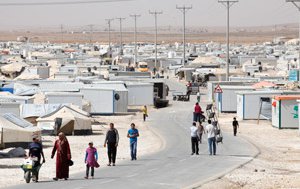 During times of conflict, populations that are forced to flee their homes are often the most vulnerable, finding themselves reliant on the host country which they enter. In Jordan, despite the country making significant efforts to aid families and communities fleeing the conflict, authorities are tasked with managing the increased pressure the rising population is placing on the country’s infrastructure, while facilitating cooperation between the host and refugee communities in order to mitigate potential conflict.

The Zaatari refugee camp, the first official camp built by the Jordanian government in July 2012, has a population of over 80,000, making it one of the largest population centres in the country. The rapid growth of what was designed to be a temporary settlement comes with an array of challenges. The Jordanian authorities must ensure that people are provided with access to housing, water, sanitation, health and educational services, as well as deal with societal challenges such as maintaining order and cooperation between inhabitants and warding against criminality, violence, and extremism. Although the United Nation High Commission for Refugees (UNHCR) takes a leading role in providing many of the necessities within the camps, they must do so while performing a balancing act: ensuring that they do not remove people’s agency and ability to self-govern while preventing others within the camp from exerting a dangerous influence over those most vulnerable.

The pressure on resources and infrastructure is reaching breaking point
Of the total number of refugees, it is estimated by the government that 85 per cent live outside purpose-built refugee camps. This creates its own problems. Many cities and towns in Jordan are already struggling with a scarcity of water, limited employment opportunities and access to health and education services, and the shortage of adequate housing.

As the population grows with the addition of refugees, the pressure on resources and city infrastructures is reaching breaking point. Amid such conditions, it is feared that tensions between the Jordanian host and Syrian refugee communities may escalate. For example, with regard to employment, it is often highlighted that the refugee community is willing to work illegally for less pay, resulting in wages being driven down. This could result in a violent spiral of blame, reduce the interaction between the communities, and lead to a hostile situation of ‘us vs. them’.

Although the Jordanian government is making significant efforts to respond to the refugee crisis, it has a funding shortfall, with almost 30 billion USD estimated to be required over 2015. Although the strategy set out by the Jordanian government in its 2015 Jordanian Response Plan (produced by the Jordanian Response Platform) is much needed to tackle the strained relationship between refugee and host communities, it also comes with significant risks if plans are implemented from the top down. If plans are put into place in coordination with International Non-Governmental Organisations such as the UNHCR, but without coordination with community-based governance and municipal governance, it could result in unsustainable projects, tensions between communities, and the loss of people’s capacity to self-govern, increasing tensions and the potential for conflict.

In order to foster a harmonious relationship between the Jordanians and the refugee population, the right balance must be struck when addressing the range of problems faced. Assistance cannot simply be forced through without proper consultation and engagement with those that it will affect.

Latest from Jordan and Syria → 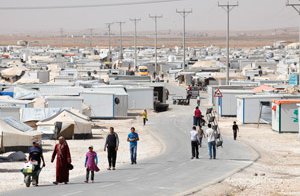